As the final results dribble in and the media’s analysis continues, the UK is in the wake of what’s been coined the first ‘social media election’. Facebook teamed up with artists Bompas & Parr to turn the London Eye into a political pie chart. Over the past week, the wheel has lit up to reflect the volume of discussion around the different parties and election issues. We’ll have to wait and see if the final election result illuminates the River Thames this evening.

As expected, Facebook rolled out its ‘I’m a voter’ button for the first time in a UK general election, reportedly receiving more than one million clicks throughout the day. Twitter also prompted users to share their trips to the polls with the #IVoted hashtag, visualised with this CartoDB chart.

No fucking way is he eating me

However, the most unlikely star of the election was Paddy Ashdown’s hat. After the exit polls revealed the Liberal Democrats could win as few as ten seats, the former party leader told presenter Andrew Neil he would eat his hat if that turned out to be true. His claim gave birth to @paddys_hat on Twitter, which has attracted a healthy following of 12,200 – only 4,000 short of Paddy’s own account. As we write this, there are only three seats still to declare and the Lib Dems have taken just eight. Paddy’s hat is getting very anxious.

Upmarket fashion site Net-A-Porter has announced it is launching its own social network, combining photo sharing and shopping in a new app called The Net Set. Clever photo recognition software will analyse photos that users upload and suggest visually similar products from the Net-A-Porter catalogue. The site claims to receive more than six million unique visitors per month and has 4.1 million fans and followers across its social media channels, so not a bad platform from which to launch an ambitious project of this type. 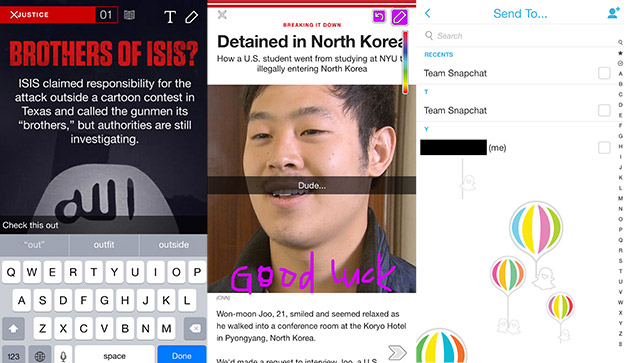 Snapchat made further tweaks to its app this week, which now allows users to send Discover content to their friends. Discover, which features curated content from the likes of Sky News, Cosmopolitan and VICE, has seen a decline in usage of up to 50% this year, but this move should help spread its text, image and video content throughout to more users. Snapchatters can simply press and hold while on the Discover tab to share what they’re seeing with their list of contacts.

The future of Google+ still seems uncertain, with the company focusing on Photos and Streams as its core elements, but changes announced this week suggest the search giant is still looking to innovate its social network. On Monday, the company revealed Collections, which allows users to group similar posts into sections that will appear in a new tab on their profile. Some curated collections have already been launched, taking in everything from ‘LizardsInHats’ to San Francisco Street Art. Only time will tell if this new Pinterest-style feature attracts more regular users to the platform. Choosing the right hashtag for a campaign or event can be a tricky task. So much so, researchers at Twitter have undertaken research to see if there is indeed a magic formula. The findings seem limited at the moment, since the team only looked at hashtags related to eight prime time TV shows in the US, but interestingly 15 to 17 characters seems like the optimum length. Hashtags which included the word ‘team’ also generated more buzz. A broader survey of the Twittersphere would certainly be interesting…